Harsh weather conditions in the Black Hills were no match for our team, who completed this project with zero injuries, zero recordables, and zero non-conformance reports.

The 360-acre Gilt Edge Superfund Site, an abandoned, open-pit cyanide heap leach gold mine first mined in 1876, was developed in highly sulfuric rock. Located in the Northern Black Hills southeast of Deadwood, South Dakota, the site was added to the EPA’s National Priorities List in 2000 at the request of the state. To prevent surface water from interacting with acid-generating materials and reduce the amount of acid rock drainage on site, acid-generated mine wastes had to be excavated, consolidated into mine pits and covered. Substantial earthwork, regrading, and improved water diversion and drainage structures were required.

The pipe corridor was constructed parallel to the road and down to a nearby pump station at the Ruby Repository. We installed more than 31,000 linear feet of HDPE pipe from the Ruby Repository to the Anchor Hill pit, along with clean-out reservoirs, valves, and ten structures.

Despite project delays caused by the harsh weather conditions, the project was completed successfully, safely, and without incident. 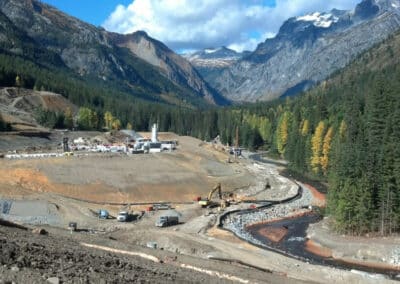